Sailing across the Bay of Biscay provided a great opportunity to experience many of the basic principles commonly taught in oceanography classes.   We used the passage from Falmouth, England to Vigo, Spain to observe the environment and sample the water like we were living in a large oceanography laboratory (and we were!). 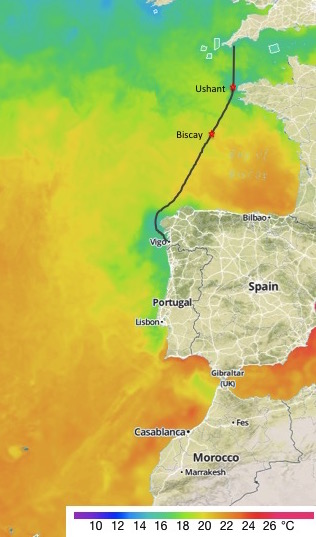 Sea Surface Temperature (SST) of our route between Falmouth and Vigo.  The two CTD locations are noted with stars at Ushant and near the centre of Biscay.

When we departed Falmouth, the surface water temperature was a cool 14.4° C. As we sailed southwards, towards Ushant (Ile D’Ouessant) off the coast of France near Brest, the waters began to warm up. The predominate water temperature near this region was about 17° C, but the sunny conditions combined with the light winds from the south probably contributed to the slightly warmer surface layer temperature of 18° C, as measured by the RBR CTD.

The following day we dropped off the shallow continental shelf (~100 m) into the deep plateau of the Bay of Biscay with a typical depth of about 4000 m.   We were motoring across Biscay in flat calm conditions, zero wind, and full sun! These conditions are rare in the middle of Biscay, so we took advantage of the sun and calm for a swim call in the deep, clear blue waters. Following the swim call, we took another CTD cast and measured the near-surface water of about 21° C. The warm surface water, heated by the sun in the calm conditions, quickly cooled to about 19° C below a sharp thermocline. Indeed, we could feel the temperature change when we dove off the deck and descended more than a few meters deep below the surface! We took advantage of these calm conditions to do a Secchi disk measurement and recorded a whopping 26.2 m depth in the clear water!

When the wind picked up from the North that evening, we were able to hoist the sails and start the fast downwind run to the corner of Spain and around Cape Finnisterre.  As we sailed through the southern part of the Biscay Bay, we crossed several ocean fronts that had clear lines of different currents and waves.  The frontal zones were as long as the eye could see, several hundred meters wide, and semi-periodic with a wave length of approximately 10 km.  Perhaps these were internal waves reaching the surface that were enabled by the strong and shallow thermocline from the calm, warm period?

As we rounded the northern tip of Spain and sailed towards Vigo, the seawater temperature (and air temperature!) dropped substantially.  This is the classic coastal upwelling case where the strong Northerly winds force the surface water to the right  (offshore) and the water near the coast is replaced by cold, nutrient rich deep water.  This is where the fishing is exceptional, and we dodged fishing boats for the next 50 miles until we reached the protected Ria of Vigo.

Preparing to lower the RBR CTD in the warm, blue waters of Biscay Bay.